THIS IS A TEST INSTANCE ONLY! REPOSITORIES CAN BE DELETED AT ANY TIME!

This is a Golang port of simdjson, a high performance JSON parser developed by Daniel Lemire and Geoff Langdale. It makes extensive use of SIMD instructions to achieve parsing performance of gigabytes of JSON per second.

Performance wise, simdjson-go runs on average at about 40% to 60% of the speed of simdjson. Compared to Golang’s standard package encoding/json, simdjson-go is about 10x faster.

simdjson-go is a validating parser, meaning that it amongst others validates and checks numerical values, booleans etc. Therefore these values are available as the appropriate int and float64 representations after parsing.

Additionally simdjson-go has the following features:

Based on the same set of JSON test files, the graph below shows a comparison between simdjson and simdjson-go. 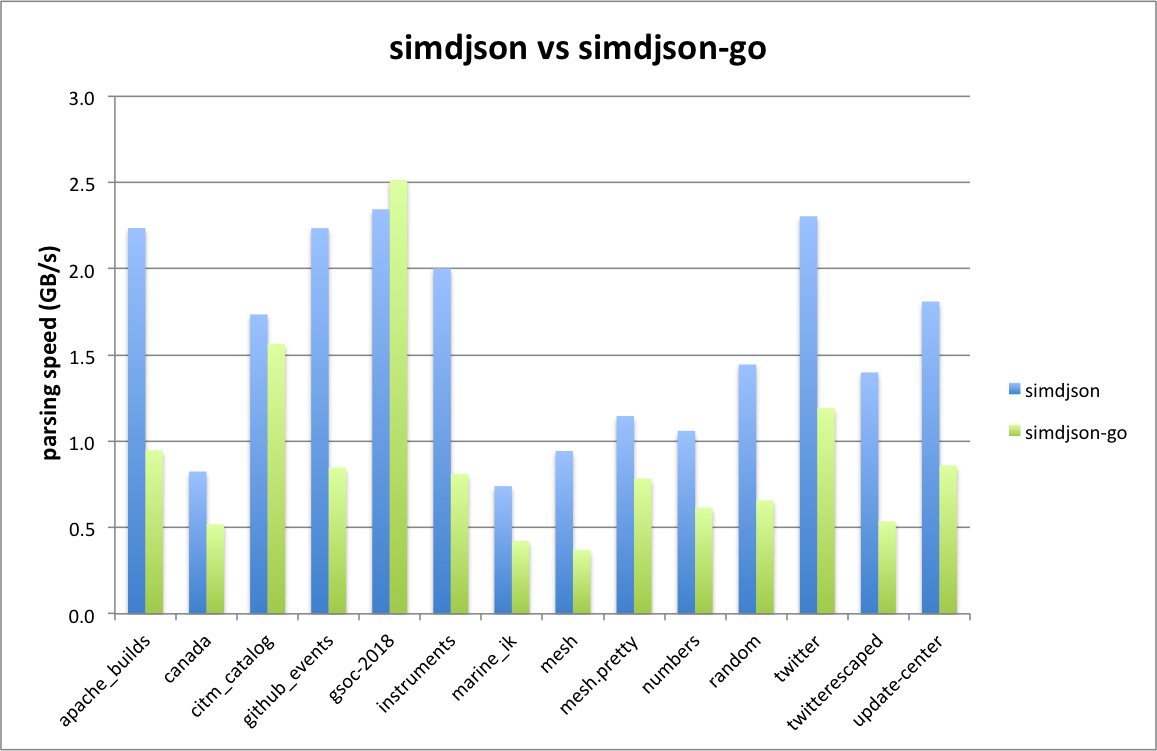 These numbers were measured on a MacBook Pro equipped with a 3.1 GHz Intel Core i7. Also, to make it a fair comparison, the constant GOLANG_NUMBER_PARSING was set to false (default is true) in order to use the same number parsing function (which is faster at the expense of some precision; see more below).

Performance vs encoding/json and json-iterator/go

Below is a performance comparison to Golang’s standard package encoding/json based on the same set of JSON test files.

Here is another benchmark comparison to json-iterator/go:

Stage 1 has been optimized using AVX512 instructions. Under full CPU load (8 threads) the AVX512 code is about 1 GB/sec (15%) faster as compared to the AVX2 code.

These benchmarks were generated on a c5.2xlarge EC2 instance with a Xeon Platinum 8124M CPU at 3.0 GHz.

Run the following command in order to install simdjson-go

In order to parse a JSON byte stream, you either call simdjson.Parse() or simdjson.ParseND() for newline delimited JSON files. Both of these functions return a ParsedJson struct that can be used to navigate the JSON object by calling Iter().

Using the type Iter you can call Advance() to iterate over the tape, like so:

simdjson-go has the following requirements:

simdjson-go follows the same two stage design as simdjson. During the first stage the structural elements ({, }, [, ], :, and ,) are detected and forwarded as offsets in the message buffer to the second stage. The second stage builds a tape format of the structure of the JSON document.

Note that in contrast to simdjson, simdjson-go outputs uint32 increments (as opposed to absolute values) to the second stage. This allows arbitrarily large JSON files to be parsed (as long as a single (string) element does not surpass 4 GB...).

Also, for better performance, both stages run concurrently as separate go routines and a go channel is used to communicate between the two stages.

Stage 1 has been converted from the original C code (containing the SIMD intrinsics) to Golang assembly using c2goasm. It essentially consists of five separate steps, being:

For more details you can take a look at the various test cases in find_subroutines_amd64_test.go to see how the individual routines can be invoked (typically with a 64 byte input buffer that generates one or more 64-bit masks).

There is one final routine, find_structural_bits_in_slice, that ties it all together and is invoked with a slice of the message buffer in order to find the incremental offsets.

During Stage 2 the tape structure is constructed. It is essentially a single function that jumps around as it finds the various structural characters and builds the hierarchy of the JSON document that it processes. The values of the JSON elements such as strings, integers, booleans etc. are parsed and written to the tape.

Any errors (such as an array not being closed or a missing closing brace) are detected and reported back as errors to the client.

Similarly to simdjson, simdjson-go parses the structure onto a ‘tape’ format. With this format it is possible to skip over arrays and (sub)objects as the sizes are recorded in the tape.

simdjson-go format is exactly the same as the simdjson tape format with the following 2 exceptions:

In order to support ndjson, it is possible to have many root elements on the tape. Also, to allow for fast navigation over root elements, a root points to the next root element (and as such the last root element points 1 index past the length of the tape).

simdjson-go has been extensively fuzz tested to ensure that input cannot generate crashes and that output matches the standard library.

The fuzzers and corpus are contained in a separate repository at github.com/minio/simdjson-fuzz

The repo contains information on how to run them.

simdjson-go is released under the Apache License v2.0. You can find the complete text in the file LICENSE.

Contributions are welcome, please send PRs for any enhancements.

If your PR include parsing changes please run fuzz testers for a couple of hours.